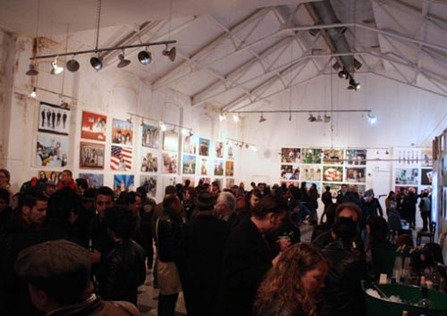 We love 77
We Love 77 by   Sardine & Tobleroni is   an exhibition of 77 paintings of 77 highly influential Punk bands   featuring   bands from the early American precursors like the Stooges, to contemporary bands like the Libertines.   The exhibition We Love 77 also include concerts, documentaries and movies that try to give a profound and detailed insight into one of the most important cultural and social movements of the last century - Punk which has had a great impact on the political & social landscape as well as on contemporary art and music, questioning & rejecting existing moral values and the creation of a fertile ground for new ideas   that have changed the world politically & socially ever since.

"The 1977 Punk revolution managed to change and influence rock music in a single year to such a degree that it has no real parallel in the history of rock music." - 77 the Year of Punk and New Wave by Henrik Bech Poulsen

For many, 1977 was the definitive year of Punk and this exhibition is a cultural commentary as well as a celebration, giving historical context through painting, film and music. Sardine & Tobleroni honor the music avant-gardists who laid the foundation of new thinking, invention and liberation. Whether in their paintings, films or installations, Sardine & Tobleroni's work transcribes and embodies the creative approach and spirit of DIY favored by the punks. The result is the first art exhibition of its kind and a monumental tribute by the artists to one of the most exciting eras in the history of popular culture.

The emergence of youth subcultures has been one of the most controversial aspects of life in post-war Britain. The press and public have condemned these groups as almost demonic. In a time of rapid and radical social change, the fresh ideas that came about during the punk era are as stimulating and relevant today as they were at the time.

This exhibition of 77 paintings chronicles the evolution of punk rock and is a monumental tribute by the artists to one of the most exciting eras in the history of popular culture.

The exibition was launched with the help of WW Gallery in London in March 2010.